Attempts to find coal on Yorkshire’s north east side proved fruitless on a number of occasions shortly before the First World War.

Prominent Selby area landowner, the Earl of Londesborough, commissioned several bore holes, at Barlow, Selby and Wressle. The coal seams located were said to be thin and of poor quality.

With drilling technology more advanced, further bore holes were made at Kellington during the 1950s and workable seams were discovered: the Beeston Seam and Warren House Seam. Further drilling took place around Selby in 1964 with drill cores revealing amazing results. Most important wa,s the discovery of the Barnsley Seam, running towards the east, good and thick in some areas.

Further exploration was deemed necessary as it looked like a lucrative, new coal field had been found. An extensive boring programme began north of Selby in 1972 and the results found the Barnsley Seam was up to 11 feet thick in places. Early estimates proclaimed there was up to 600 million tons in the 150 square miles of the new Selby coalfield.

Before the Selby coal field could progress, with the projected establishment of six collieries, a number of issues had to be tackled: the effect on a relatively rural area; subsidence problems, in particular the effect on Selby Abbey; and the change to the local economy.

Fortunately, on the western edge on the proposed development area, coal was found at a low level. A plan was devised to gain access from there to the prime coal area by means of a sloping drift. Once the drift was established connection would be made to the five other pits by means of an underground road system. Shafts would be established in the five pit areas for ventilation and the transportation of men and materials, whilst all the muck and grime, usually associated with collieries, would be in one place and this was at Gascoigne Wood, six miles west of Selby. With coal handling not present at the five sites, the size of each pit was expected to be around 20 acres.

Selby, it was claimed, would add an extra ten million tons of coal annually until 2015, at a time when eastern oil had become a political weapon. Full production was expected to be reached by 1987-1988. Work on driving in, along the Barnsley Seam, from Gascoigne Wood, and sinking shafts on selected sites was to begin at the same time. The flow of coal was to come from the drift first, though it was expected the sinking of shafts would also produce coal and would be extracted from there until a connection between shaft bottoms and the drift were established.

On April 1, 1976 Anthony Crossland, the Secretary of State for the Environment, granted the NCB planning permission for the Selby site. He felt the richness of coal under the 110 square miles around Selby was a national asset to valuable to ignore.

The Duchess of Kent took charge of a drill at Wistow to mark the start of mining in Selby on October 29, 1976.

By April 6, 1983 The Yorkshire Post was stating full-scale mining would start in the Selby pit complex in six weeks. The day before, the NCB showed off some its new mining equipment at Gascoigne Wood. The big job was to install the coal face equipment which would rapidly become a world record breaker when production started.

Contractors had already assembled the £3.5, 138 yard long wall of armoured props, micro chip controls and a giant shearer at Gascoigne Wood inside the world’s largest coal shed to ensure that the equipment worked and to enable training to start. The shearer was to be dismantled and transferred piece by piece through the 5,000-yard long underground drift between Gascoigne Wood and Wistow which was the first pit to begin production.

The output of five mines was loaded into ‘merry-go-round’ trains, of 1,000 tonnes capacity, bound for local power stations. Trains operated round the clock to and from power stations. Gascoigne Wood was the scene of ugly clashes during the 1984/85 Miner’s Strike but in January, 1986 miners broke three tunnelling records.

Carving out a 20ft diameter circular roadway at Gascoigne Wood drift mine, they tunnelled 19 metres in a shift, 43 metres in a week, to shatter records which had stood since 1981. In July 1987champagne corks were popping as miners reached the end of Europe’s longest mining tunnel. 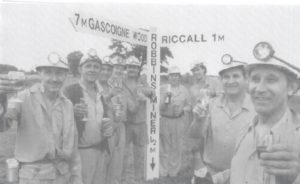 Eight hundred yards underground a £3m American tunnelling machine stopped work after cutting a seven and a half mile long ‘tube’ through the coalfield. Selby’s output rose gradually after the Miner’s Strike, peaking in 1993/94 with an output of 12 million tonnes. Under the re-organisation of the coal industry in 1994, Selby coalfield was acquired by RJB Mining. Losses occurred thereafter until the entire complex was closed by October 2004.