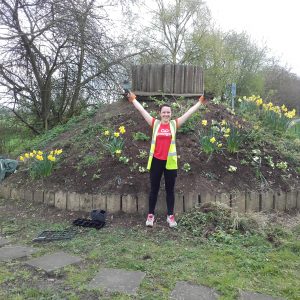 The Solar System Greenway is now a recognised Site of Importance for Nature Conservation acting as a ‘green corridor’ for species to migrate in response to seasonal or longer-term climate changes. York Greenways and Sustrans Greener Greenways project work with local volunteers to preserve and enhance the rich ecology that has developed since the railway line was closed.

One ongoing threat is invasive species, in particular Himalayn Balsam, which tends undermine bio-diversity. Much of volunteer time is spent keeping the corridor free. Near Naburn Bridge an interpretation board explains more,

With a floor of ballast and the need to keep leaves off the line, the ecology of the East Coast Main Line was necessarily limited. With closure of the line, nature began to re-establish itself.

Two years after the closure of the line, work started on the creation of what was then known as the York-Selby cycle path. The work, undertaken by Sustrans with funding from the Manpower Services Commission, included the planting of a six mile avenue of trees of differing species.

Much of the management of this popular amenity is done by volunteers – Sustrans and Trans Pennine Trail Rangers and York Greenways together with local residents, Good Gym and York Cares. Sustrans, the national charity that owns the greenway, focused its efforts on the path itself and a one-metre verge on either side. In 2011 local volunteers, in partnership with Yorkshire Wildlife Trust, set up York Greenways to maximise the ecological value of this 6-metre-wide 6-mile-long corridor and other greenways in and around the city. The following year Sustrans gained funding for its ‘Greener Greenways’ project and the two projects work in partnership to control invasive species and encourage bio-diversity. Though this project has now finished York Greenways is continuuing the work.

In the 1980s the first Rangers, Barbara and Reg Suffield, recorded the species found along the route, and the Railway to Greenway project compared their findings with what can now be seen, thirty years later. Sadly it seems that bio-diversity is diminishing mainly due to more intensive  agricultural mlethods on adjoining land. The Greenway is now more of a refuge.

The path crosses the River Ouse and here, below the Naburn Bridge, we work with the Tansy Beetle Action Group to encourage this unique, beautiful but endangered insect.

Guided walks are organised to look at bats, butterflies, wildflowers and birds. For information see the York Greenways Facebook site

If you want to know more or become actively involved contact us.

Natural history in the archive