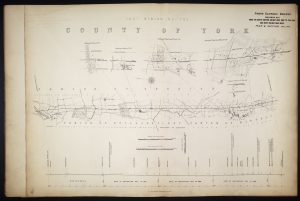 The year is 1834 and the York Herald first noted an application for an Act of Parliament to create a ‘direct’ link from Doncaster to York. Only 3 miles shorter than the existng route, this diversion would nevertheless cut out a number of smaller towns and complicated junctions on the existing line and reduce the need to share with rival companies. It thus cut journey time on the East Coast main line by 30 minutes.

It took until 1864 for permission to be granted (objectors included the Archbishop of York fearful of it frightening his horses) and a further 6 years for the line to be opened. Over the years since then, services have included the Flying Scotsman, the Silver Jubilee, the Capitals Limited and the Elizabethan. 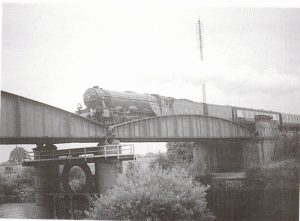 Originally shared by the North Eastern and Great Northern railway companies, in 1923 the entire route from London to Edinburgh came under the control of the London and North Eastern Railway.

In 1948 it was nationalised but passenger traffic to Riccall, Naburn and Escrick stopped in 1958 and goods traffic by 1964.

Steam was replaced by diesel and bridges raised in anticipation of electrification, but in 1983 the line was closed to make way for the Selby Coalfield. The risk of settlement would have meant speed restrictions but the diversion also gave the opportunity of by-passing the Selby and Naburn bridges.

Today many of the hundreds of Greenway users – cyclists, walkers and horse-riders – know nothing of this history, so this project is building an archive of memories and a gateway to a wide range of historical material. If you would like to be involved or have memories to share please get in touch (see contact page).

To get an idea of how it used to be, take a look at this amazing CGI clip from York film-maker Dave Thorp.

Railway in the archive

View all archive items in Railway

View all blog posts for Railway