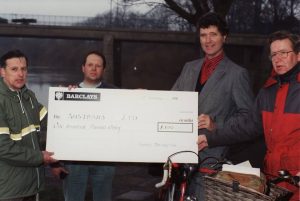 Despite some opposition, the Selby District Council (which at that time stretched to the very suburbs of York) voted to support the project to convert the disused railway into a traffic-free path. The North Yorkshire branch of the  Cycle Touring Club raised a petition of over 1,000 in favour and wrote to the Prime Minister and Ian McGregor of the National Coal Board. Ron Healey has donated his archive to the Bishopthorpe Community Archive. 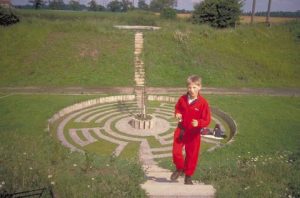 John Grimshaw’s Railway Path Project, later Sustrans, was commissioned to undertake the project, and work started in 1985. (You can find an interview with John Grimshaw elsewere on the website). The path was completed in 1987 – the first section of the National Cycle Network which now stretches to 15,000 miles across the country and subsequently part of the Trans Pennine Trail. The work was funded by the Countryside Commission, the sale of the ballast and the Manpower Services Commission and undertaken as a job creation scheme. The job was run by Dave Jackson who went on to manage Sustran’s regional construction and maintenance team based in Bishopthorpe.

After boundary changes, the City of York Council funded the tarmac surface as far as Escrick, and in 2014 the remaining stretch to Riccall was surfaced as part of the Future Jobs Fund programme. 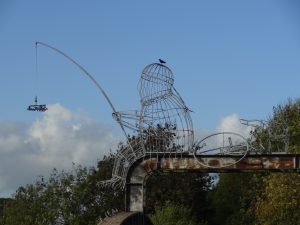 The bridge over the river Ouse hosts the iconic ‘Fisher of Dreams’ sculpture and in 1999,a team  from  the University of York created the scale model of the Solar System running 10 kilometres from York to Riccall. More informatioin can be found on their website: https://www.york.ac.uk/solar/.

STOP PRESS Latest news on the fate of Escrick Sidings can be found as archive item below.

Solar system greenway in the archive